On July 2, 1940 the Homer Hadley floating bridge was opened, replacing ferries as the best way to traverse Lake Washington.  With the new ease of commuting to Seattle, the East Side and Mercer Island began to grow into vibrant suburbs. As the Island population grew, Masons who were members in Seattle and Bellevue lodges decided that a lodge on Mercer Island was needed.  In 1953 the Charter members of our Lodge received the approval of the Grand Lodge of Washington to operate under dispensation, and on June 16, 1954 the Charter was issued, formalizing the creation of Mercer Island Lodge #297.

The Lodge initially met in what is now the Sunnybeam School (aka the Little Red Schoolhouse) at the south end of the Island. In 1966 the Keewaydin Clubhouse was purchased by the Mercer Island VFW and the Lodge, which shared many members with the VFW, became the VFW's first tenant,  Our Lodge enjoys a strong partnership with the VFW post and we still meet there today. 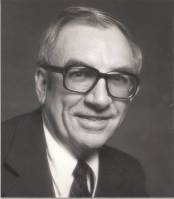 Very Worshipful Brother Dean Quigley, considered by all who knew him as the cornerstone of our Lodge, wasn't among the Charter Members but he was close, having joined the Lodge in 1955. Through his final year Dean remained active in all of the Lodge's activities.  Twice he served as Master of the Lodge and was the Lodge Secretary for 30 years.  He also held several Grand Lodge offices, served as District Deputy to the Grand Master for District 7, and was active in the York Rite concordant Masonic organizations.  In the community he was a founder of Mercer Island Community Services, a Post Commander for VFW#5760, and volunteered with the Boys and Girls Club, Junior Achievement, and the USO. All who met him were greeted with a smile, a warm handshake and often a joke.

He was a walking encyclopedia of Masonic knowledge and was strongly committed to helping other Masons learn about our Craft.  He frequently hosted dinners where small groups of Masons would gather to work on Lodge events or learn about different aspects of Masonry and he routinely passed out books, articles, and notes to the members to help generate ideas for the Lodge's education programs.

In honor of his kind, generous spirit and his enduring contributions to Masonry our Lodge was renamed to the Dean LeClare Quigley Lodge at Mercer Island #297, marked by the issuance of a new Constitution on December 2, 2021